“Silly things do cease to be silly if they are done by sensible people in an impudent way,” Jane Austen wrote in “Emma,” justifying the frivolous nature of the last novel she published before her death two years later. The central purpose — maybe even the loftiest ambition — of any film adapted from Austen’s book should be to support that claim, and to do so with enough conviction to subvert the universally acknowledged truth that some works of art are more serious than others. (Let’s take a moment to observe that “Clueless” was a worthy update because of Cher Horowitz’s Valley Girl vapidity, not in spite of it.)

Enter: Director Autumn de Wilde’s lavish but loyal “Emma” (stylized “Emma.”), an indulgent movie about indulgent people that dares to imagine how — on a long enough timeline — the whole of human existence might be no more important than a straw hat shaped like a fortune cookie, or a navy blue shirt popping against a mustard peacoat, or the romantic misfortunes of an unsophisticated teenage girl as they reverberate through a vain pocket of the English gentry.

This confection of a period comedy leans so hard into the solipsism of Austen’s story that it might as well be set in a pre-Victorian Westworld, but if “Emma” is a pound of icing on a tablespoon of cake, de Wilde makes sure that every bite delivers its own discrete sugar high. She exalts the silliness of it all until even the most asinine details feel deadly serious, and nothing in the world seems to matter beyond who Miss Harriet Smith will marry.

Emma Woodhouse (Anya Taylor-Joy) is first seen traipsing between the letters of the film’s title, as though everything we see exists only for her self-amusement. The prodigal daddy’s girl is still every bit as “handsome, clever, and rich” as Austen conceived her, but Taylor-Joy plays to the character’s ennui; Emma’s boredom is on the verge of becoming an existential crisis, as she swans around her father’s Highbury estate worried that we might have exhausted our patience for stories about people wallowing in their own wealth. And for a minute there, her fears seem justified; “Emma” is already off to the races while the rest of us are still salivating over the décor.

For the first 20 minutes or so, everything and everyone seems entombed in marzipan. Emma is all collarbone and no spine, her widowed father (peak Bill Nighy) is busy laying the foundation for jokes that won’t land for another hour, and our heroine’s naïve project Harriet (Mia Goth, channeling the ghost of Brittany Murphy) doesn’t even get to make eyes at her silent farmer crush before Emma redirects the girl’s attention to the preening new vicar in town, Mr. Elton (“The Crown” actor Josh O’Connor, a master of obsequiousness who pads a few ear-high collars into a full and funny character).

Emma meddles in the affairs of others in order to keep the pressure off herself — she’s vowed to remain unwed so as not to abandon her dear Mr. Woodhouse — but de Wilde’s film doesn’t gel until we see her spar with the one man who might threaten her celibate yenta lifestyle. That would be the esteemed Mr. George Knightley (a rumpled and lovable Johnny Flynn), who wears his inherited wealth like he slept in it. Flynn and Taylor-Joy don’t have the most explosive chemistry, but these actors don’t want for it here; their characters entertain each other, and that’s enough to keep things in motion. 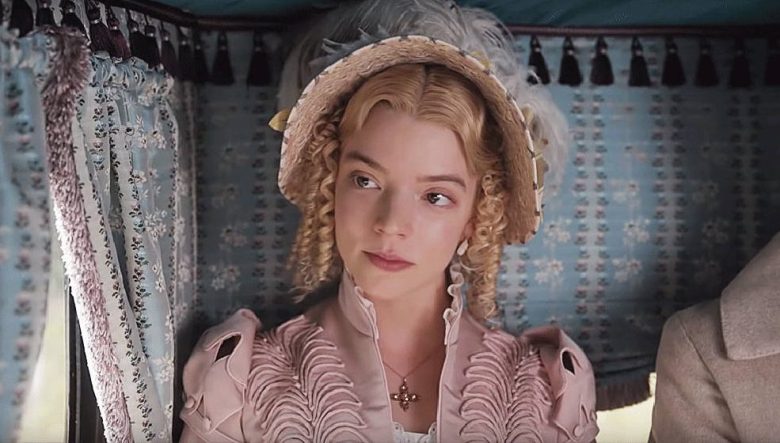 “Emma” has never had much of a plot — it swoons forward on the strength of looks, gestures, and implied desires — and that makes it a perfect vehicle for de Wilde’s feature debut. A veteran rock photographer and music video director whose most iconic work includes the cover shot of Elliott Smith’s “Figure 8,” de Wilde shoots “Emma” like a ballet that’s set on the highest tier of a wedding cake and cast entirely with life-sized toppers; her tilt-shift finale rounds out the rare movie that you can actually taste, even if “Marie Antoinette” and “The Grand Budapest Hotel” have already made sumptuous meals from a similar recipe.

David Schweitzer and Isobel Waller-Bridge’s minuet-like score might have felt oppressive had de Wilde not baked the music into each scene, so that every strut, smile, and touch is folded into a greater dance (rigid compositions help make de Wilde’s frames seem like stages). Class has seldom been so palpably choreographed, to the point where the film’s one pivotal dance sequence almost seems redundant. Even the ringlets in Emma’s hair appear to have their own blocking, as they bounce and sway in sync with the woman who wears them.

“Emma” only grows more assured (and symmetrical) as its namesake loses her balance, the pastel splendor of Christopher Blauvelt’s cinematography and the vocabulary-defying genius of costume designer Alexandra Byrne endowing this classic story with a new energy all its own. Highbury becomes dry enough to accommodate Nighy’s humor, Taylor-Joy finds a wonderful, furrowed take on her character amidst Emma’s confusion, and every member of de Wilde’s supporting cast manages to blend in to the film’s style (special mention is reserved for “Sex Education” stars Connor Swindells and Tanya Reynolds, who bring just the right amount of irony to their respective parts of Robert Martin and Mrs. Elton).

Even if de Wilde’s style-forward approach emphasizes the world of Highbury over its inhabitants — have we talked about the incredible town haberdashery, or the Greek chorus of tittering schoolgirls who add a whole new plane to the action whenever they glide through the background? — her actors make it fun to watch their characters ascertain and assert their true worth. Silly as it can be in these surroundings, few among us take anything more seriously; the cleverest moments in “Emma” make this fondant of a film feel less like a guilty pleasure than a mirthful kind of vibe check (watch how Wilde shoots Emma and George in shallow focus so that these self-obsessed socialites blend into the drama of the priceless oil portraits that hang on the walls behind them).

By the time it’s over and our spoiled young heroine has realized that she’s “totally, butt-crazy in love with Josh,” the film’s stylized title no longer suggests that “Emma.” is the definitive version of Austen’s story — period — so much as it’s saying that de Wilde’s version is the most “Emma” that “Emma” has ever been. De Wilde doesn’t strain for relevance or reinvent the wheel, she just unapologetically serves dessert for dinner until you’re left with the satisfaction of eating a three-course meal.

Focus Features will release “Emma” in theaters on February 21.

How To Tell If You’ve Have A Commercial Screenplay Idea

The Anti-Resolutions of 2020: How Filmmakers Are Crafting Attainable Goals